Sooooo I have had fiction, flash fiction and poetry published in Leaf Books, Inner City Magazine, Proletarian Poetry, Atom Bomb Bubble Gum and the Loose Muse Anthologies and elsewhere. Over the years appeared at the Bowery Poetry Club and Carlitos NYC, Loose Muse, Beyond Words, Lumen, Hearing Eye, The Hard Edge Club and Angel Poetry. Here I’m at the opening of a new Iraqi cultural centre in West London I read from the Epic of Gilgamesh and a few of my own poems.

Besides this there’s been a cornucopia of other venues, large and small, strange and charming. None more so than the Vout-O-Reenee’s Club where myself and many others, including Malikas Poetry Kitchen buddies Jill Abram, Seraphima Kennedy and Peter Raynard, participated in the Poem-A-Thon for refugees organised by Jacqueline Saphra that raised over £20 000 for Médecins Sans Frontières. Great review here 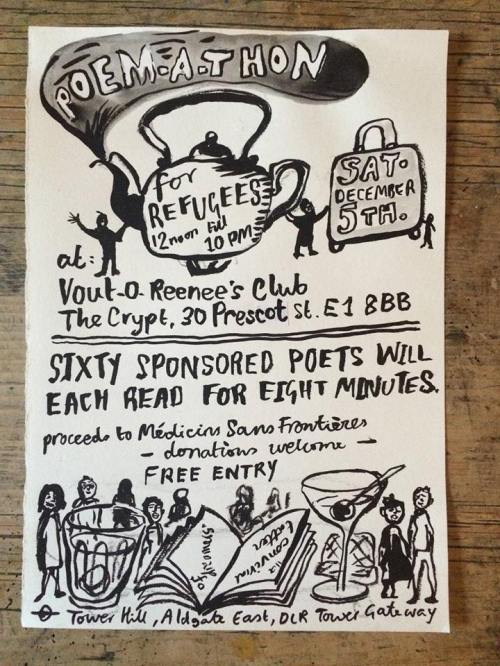 Writing comes easily to me when not gripped in the jaws of the black dog. Knowing what to do with it is more difficult. And I haven’t always been comfortable with the live thing, an epic understatement. It all started with an unexpected initiation on stage at the Shoot the Women First film show. They told me I’d be behind a screen. Then on the night it was like, “We don’t have the leads!” Shaking, literally shaking, I took to the stage, “How do you want to be introduced?” I wasn’t planning on being introduced! Found myself saying. “Just call me, Anita.” I had to stand behind something!

Anita cut her poetry teeth with the enduring patience and encouragement from Andy Balcer, co-founder of Poets Know it, adopted the name Divine, and performed with them for over a decade including a residency at The Fridge Bar. Prior to that we conquered Bradys of Brixton, where the old bottle or insult might be thrown.

Classic Bradys quote, “Anita Divine – you sound like a sex worker.” Threw my head back, laughed! But our message was love, and love is love, and love conquers. Along the way we raised thousands of pounds for the Landmark AIDS Centre bringing our feather boas and poetic ribaldry, recorded the POWER CD with Alabama 3 and got up to mischief. 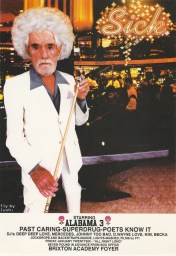 In those early days I also took part in Lambeth Librarie’s Write Around Lambeth and later at the opening of the Norwood Library Poetry Garden with Lemn Sissay. I was the mc for Michelle Taylor’s Trulips. That was another baptism of fire, when we outgrew Cafe Cairo we moved to The Queen, now demolished, read: gentrified. The Queen was home to itinerant building workers from Ireland, Liverpool and Newcastle.

Heavy drinkers. Hard men. Their response, “Your going to do what? Not in here!” When I retort, “Well, Sean says we can.” Muttering, man stares into his beer. Poetry is so scary! Nevertheless we got the locals on board; joining the audience, reading their poems on the open mike, moving tables,  fixing the sound, fixing the lights  and acting as our security.

Years passed, not quite so shy now. Have read at Stop the War events in Lambeth and beyond. Saw the birth of Bliss at the Ritzy Cafe, short lived but spectacular,  Poets Know it gravitated to the Red Gate Gallery while I and organised a series of shows in the Bonnington Centre in Vauxhall and beyond with The Way of Words. Here I’m reading at the Lambeth College Strike. 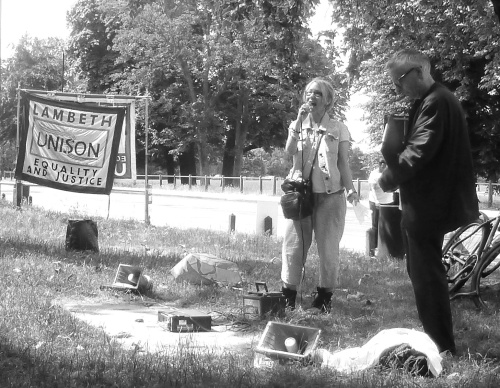 On a fine spring day alongside other members of MPK I’m reading from Touched. We took part in the first Common People, at the Clapham bandstand in 2014, a free cultural event showcasing local musicians, dance groups, performance artists combined with seed planting organised by Bandstand Beds, attended by over 500 people on the Common throughout the day. More info

I am passionate about finding new audiences for poetry and to that end have also performed at Subterfuge Cabaret, The Creative Swing, The Plunge Club, Madchicks, besides picket lines and at a swimming pool. Here at The Creative Swing, a collaboration of writers, filmmakers and dj’s,  I performed a reverse strip tease against a backdrop of my own poems exploring sexuality and desire.

Below you can see me (a bit blurry) reading Bloodlines at Loose Muse in the Poetry Cafe, a poem inspired by events I witnessed in Tahrir Square in 2011 in the midst of the Arab Spring, published in one of the Luse Muse anthologies.  The war on terror and its repercussions has been a subject of my work for some time, 21stCentury Guernica, my poem essay about the massacre in Fallujah Iraq in 2003, was published by the Stop the War Coalition and broadcast on the Islam Channel.  It was described by the late Tony Benn as “Powerful and intensely moving.”

Way back I worked as a reviewer for arts newspaper Create 24:7 reviewing films and poetry events. I am still a member of Malika’s Poetry Kitchen – a writers’ collective, which after the  demise of Poets Know it, following the tragic death of Andy Balcer, has become my poetic home. Just as Andy gently encouraged me to take up the mike they have too inspired me to work on my craft and finally emboldened  me to submit. Such shining lights, illuminating my way forward.